WARNING: The author of this blog is a terrible copy editor. Furthermore, he has no assistant, no lackey, no trained monkey, nor magic robot to help edit these blogs. They are written and posted with little or no review. Read at your own risk!


Started as a blog, this site now is home to an ever-growing archive of stories. Most have been published somewhere, a few haven't. Personal blogs entries might still happen occasionally but it's not very likely.

Blog | Guard Shacks and the R.D.C.


About twenty years ago (I think it was spring of '85), a friend of mine accompanied his brother and a small band of mischievous honor students to the Rossville High School Sports Annex. There, under cover of—well I don’t suppose there was much cover really—they proceeded to paint the small, concrete block guard shack that sat next to the main gate. 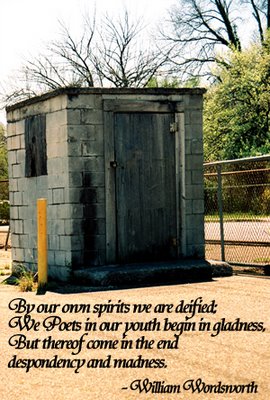 I took a picture of it and, later, sent it to my friend who had been along for the ride but hadn’t actually participated in the “redecorating”. He didn’t even recognize it at first. He told me that, although they had to repaint the sides, no one ever bothered to look on the roof and, unless the years had weathered it away, there would still be the names of the guys who had desecrated the building so many years before.


These four future leaders, in a moment of tame rebellion, had put their mark on a part of their hometown, and it was covered up posthaste. But their signatures remain (I didn’t actually check to see if they’re still there. I just like to think that they are), out of sight and, very nearly, out of mind.
It made me wonder where my signature was on the town, on lives, on anything. Where have I secretly written my name? And who will ever know it was there?
Depressed beyond all reason, I put my camera away, went home and kissed my wife.  That night, I decided to start this blog.